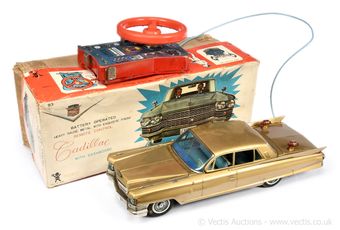 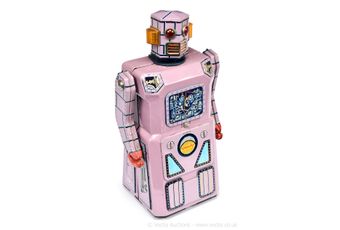 Lot Lot 3069
Masudaya (Modern Toys of Japan) "Non-Stop Lavender Robot" - this is an original mega rare Robot from 1959, highly prized by robot collectors from what is known as the Golden Era circa 1960's and is one of the "Gang of 5" rare robots from that period. Owned by the vendor from new it stands at 15"/38cm high, lilac in colour with tinprinted detail. The head is loose owing to lacking one of the 4 securing tabs but is lightly tacked onto the body using the other 3 for display. The robot is fitted with the on/off toggle switch to the front and a clean battery compartment to the underside, untested but fitted with mystery action wheels to the baseplate, very light age related wear and minor spidering to the vintage paint work but otherwise a Good Plus example for display and is the first such example of the Lavender Robot that Vectis have had. Also known as the Lady Robot because of its colour.
Estimate: £1,200 - £1,600 Sold For: £1,500 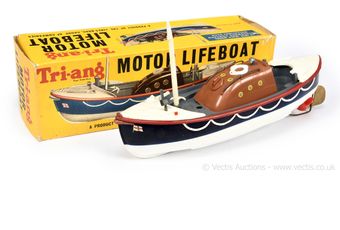 Lot Lot 3113
Triang "Motor Lifeboat" - white/blue, the deck fittings are unchecked for completeness but overall the boat is Excellent and in working order with correct Minic key, includes rudder and brass propeller, 10.5"/27cm long and comes in a Good illustrated box.
Estimate: £30 - £40 Sold For: £300 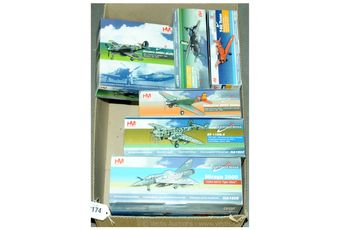 Lot Lot 3174
HM Hobbymaster a boxed group of 1/72 scale Military Aircraft (Air Power Series) to include HA1703 Aircobra HA601 (P-39) "County of London" Squadron, Duxford, October 1941, HA2001 Nakajima B5N2 "Kate" (Akagi first wave attack - Pearl Harbour, December 1941), HA1608 Mirage 2000 Jet Fighter "2004 NATO Tigermeet" along with others. Conditions do generally appear to be Excellent to Near Mint although none have been checked for completeness in generally Good Plus to Excellent outer flip-up pictorial lid boxes which are all complete with Velcro fastenings. (6)
Estimate: £50 - £60 Sold For: £220 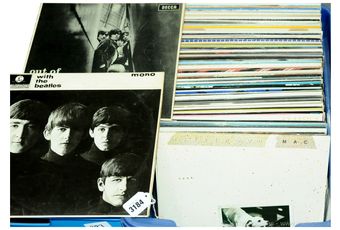 Lot Lot 3184
A large quantity of 12" Vinyl Albums/LP's (unsorted) which comprise of genres such as compilations, pop, easy listening, rock, orchestral, swing, jazz and other similar genres to include The Rolling Stones "Out of Our Heads" which is a mono pressing on the Decca label - LK4733, The Beatles "With The Beatles" which is a mono pressing on the Parlophone label - PMC1206, Fleetwood Mac double album "Tusk", Dire Straits "Money for Nothing" along with others. Conditions do generally appear to be Fair to Good although none of the vinyl's have been checked for completeness, correctness or surface wear and are all in generally Fair to Good outer sleeves (please note due to the weight of this lot shipping is not available and is collection only). (approximately 100+)
Estimate: £20 - £25 Sold For: £160 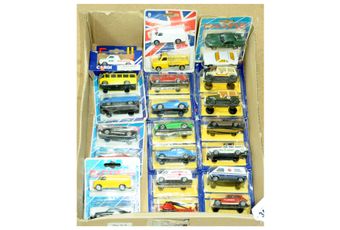 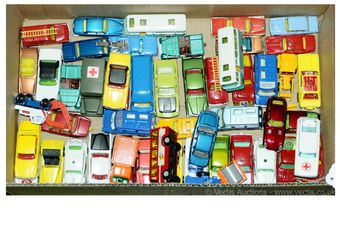 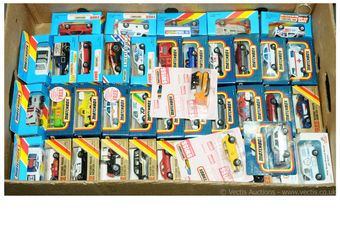 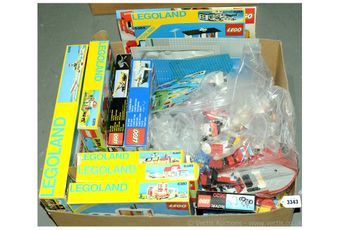 Lot Lot 3343
Lego a large group of boxed and unboxed (loosely bagged) models/kits to include Kit 6381 (Legoland) Racing Cars and Track, 6380 (Legoland) Hospital/Ambulance kit, 6392 (Legoland) Airport/Helicopter/Plane kit, along with others. Along with these kits is a Lego Technic 8040 kit (Pneumatic). Please note none of these kits have been checked for completeness or correctness and on further inspection it does appear that these kits are not complete. Also to include in this lot is a large quantity of loose Lego accessories/bricks and other items such as pre-built vehicles, boats and other interesting items, please note that all these loose pieces appear to be from other kits and there is a possibility that some of these loose pieces may actually belong to some of the boxed incomplete kits as stated. (large qty)
Estimate: £60 - £70 Sold For: £220 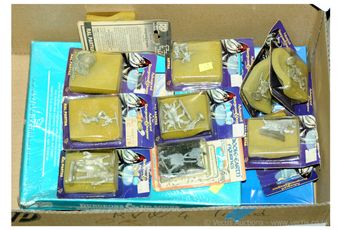 Lot Lot 3352
Dungeons and Dragons and similar a small group of boxed/blister packed Fantasy Role Play Games and Accessory Figures to include a boxed Set 2 "Expert Rules", a boxed Set 3 "Companion Rules" along with a small number of blister packed miniature Figure Accessories (Ral Partha) which includes Hobbit Thieves and others similar. Please note there is duplication in this lot - please see photo. Conditions all generally appear Good in generally Fair to Good outer boxes/blister packs (please note some blister pack windows have suffered from sun fading and the majority of the packaging does have old price stickers attached). (14)
Estimate: £40 - £50 Sold For: £200