Its not always about the large valuable collections here at Vectis, as a small family business, we like the personal touch too.

One particular story that caught our eye, is that of an 80 year old lady, who contacted us as she had been having a sort out during lockdown, and found a model which had been put way in a draw many years ago.

She can’t remember why, maybe it was taken away as a reprimand and forgotten about, or maybe it was just tidied away.  But a series of handwritten letters later, and the model is with Vectis, waiting to be auctioned on the 28th of October.

The Regular Wheels 65c Combine Harvester is only valued at £15 by our auctioneer, however as the vendor states in her letter, that money will be more helpful to her than nothing, and she’d rather not see a perfectly good toy resigned to the dustbin.

Our Specialist did advise in his first reply that this model has a rare variation, one without a central hole on a solid base, had the lady had this version she would be looking at putting the model into auction at £600, alas as she describes it herself, she has never been one of these lucky people and has the much more common model with the central hole.

It is always worth contacting the experts, just in case you are that lucky one and hold the rare variation in your hands. 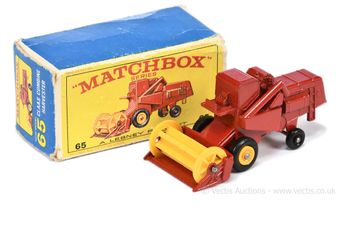 Lot Lot 5312
Matchbox Regular Wheels 65c Combine Harvester - red body with base hole - Near Mint with a couple of factory assembly paint chips in Poor to Fair & incomplete "New Model" type E4 box. Model is complete with correspondence from the vendor explaining that the model had been bought for her children over 50 years ago and never played with although the box was damaged. Nice example which has been in hibernation for half a century until discovered during a Covid lockdown spring clean.
Estimate: £10 - £15 Sold For: £70