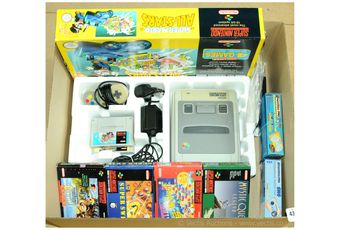 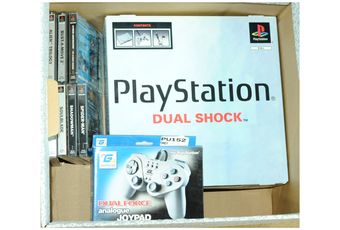 Lot Lot 4306
A boxed PlayStation group to include a PlayStation Console with Controller, Gamestar Dual Force Analog Joypad and games such as Alien Trilogy, Bust-A-Move 2, Extreme Ghostbusters The Ultimate Invasion, Rayman, Soulblade, Shadowman & Spider-Man. All are unchecked for working order. Conditions appear generally Excellent to Mint in generally Good Plus to Near Mint boxes/cases. (9)
Estimate: £40 - £50 Sold For: £110 Lot Lot 4047
Royal Canadian Mounted Police (RCMP) “Mounties” an interesting quantity of uniform and accessories to include a tunic (full dress) a cowboy hat (full dress parade) 2 x a peak caps (dress caps) along with fur hats (winter dress) conditions all generally range from Fair to Good but would benefit from a further clean along with 1 of the peak caps does have the metal badge insignia loose but still present. Also to include in this lot is a Shabraque “Saddle Cloth”, small amount of paper ephemera and paperback books all relating to “The Mounties” and similar. Conditions all generally appear to be Good although the majority of this uniform would benefit from a further clean. Also to include in this lot along with the books and ephemera is a small number of paper posters which includes posters relating to The Royal Canadian Mounted Police and similar. Conditions of the posters and the paper ephemera all generally appear to be Fair to Good. (qty)
Estimate: £80 - £120 Sold For: £240 Lot Lot 4082
The Beano and The Dandy a quantity of highly collectable vintage early issue annuals which includes “The Dandy Monster Comic” 1944, The Dandy Book 1953, The Dandy Book 1954, 55,50,52, 2 x 1956 and 1957 along with Beano Annuals comprising of “The Magic Beano Book” 1949, The Beano Book 1951, The Beano Book 1953, 54, 55, 56, 57, 58 & 1959. A unique opportunity to obtain early vintage Beano and Dandy Annuals. Conditions all generally appear to be Poor to Fair with the majority suffering from age damage such as spine wear, creasing, corner wear, splitting and other age related wear and tear which is normal of annuals this age with the majority having (This book belongs to) completed with either pencil or pen. Please note some of the annuals do appear to have score marks on front covers. Given the condition of these books as stated it is quite unique to find early vintage copies in 1 lot and these would definitely make reader copies. (18)
Estimate: £30 - £40 Sold For: £190 Lot Lot 4092
The Beano a group of early vintage “The Beano” comics which include 2 x early wartime issues (2nd world War) which are hard to find due to the paper shortage during the war and comprising of 1 x 1939 issue, 1 x 1940 issue, 1 x 1945 issue & 9 x 1946 issues and includes no.48 June 24th 1939, no.100 June 22nd 1940, no.266 September 8th 1945, no.297 November 16th 1946 along with others. Very early Beano issues are highly sought after and hard to come by now and these are no exception and include comics strips and comic characters such as “Tin-Can Tommy”, “Polly Wolly Doodle”, “The Magic Lollipop” along with others. Conditions all generally appear to be Fair with the majority appearing to suffer from age related wear and tear such as split/torn spines, corner and edge wear, flaking, page foxing, creasing and other similar age related wear and tear which is very familiar with comics of this age. Considering the condition these will still make reader copies. (12)
Estimate: £35 - £40 Sold For: £280

Lot Lot 4093
The Beano a quantity of early issue “The Beano” comics which date from early 1947 through to late 1949 and comprises of 15 x 1947 issues, 3 x 1948 issues & 14 x 1949 issues and includes no.323 November 29th 1947, no.318 September 20th 1947, no.321 November 1st 1947 along with others. Conditions all generally appear to be Fair with the majority suffering from age related wear and tear such as spine splitting/tearing, corner and edge wear, creasing, page foxing, writing on some pages and other similar age related wear and tear which is very familiar with comics of this age and is not uncommon. Considering the conditions of these comics they will still make reader copies. (32)
Estimate: £30 - £35 Sold For: £220 Lot Lot 4128
Matchbox “Models of Yesteryear” a retailers counter car display stand which is made to display models Y-1 through to Y-16. Condition of this stand is generally Fair to Good although the underneath folding sides and uprights with locking tabs do appear to be sellotaped together with some creasing and splitting at the back and underneath and slight splitting to the front. Although condition as stated this is still a Good example and would still display well with a further clean
Estimate: £30 - £40 Sold For: £220